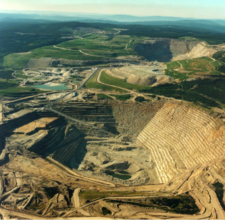 Porphyry systems typically involve 100s of cubic kilometers of the upper crust, and their footprint may be as much as 10 km across and at least 5 km vertically. Where they outcrop the main parts of the system are relatively easy to recognize, but in covered terrane the discovery of new deposits is particularly challenging. In western Canada, exploration is further complicated by the fact that most of the porphyry systems have been deformed; some are only tilted, but others are complexly faulted. This presents a challenge to modeling but also an opportunity to examine many sections of the alteration footprint, both laterally and vertically. Although the genetic model for porphyry Cu deposits is conceptually well known, there are many gaps in understanding that limit the ability to discover new deposits under cover. The broad-scale, zoned alteration is typically a product of at least two fluids: a magmatic fluid exsolved from a hydrous and oxidized magma chamber at depth and groundwater that enters the system by thermally-driven circulation focused above cupolas on the deeper magma chamber. There is little mixing between the two fluids at the level of metal deposition, but as they rise above the mineralized zone, the fluids interact along the margins of the vertically expanding magmatic-hydrothermal plume. The alteration is easiest to recognize in the magmatic-dominated central part of the system, but the peripheral alteration is often cryptic and only detectable where subtle gradients can be mapped with large amounts of outcrop. A major challenge in characterizing and even recognizing the margins of porphyry systems, and especially vectoring within the alteration footprint, is superposition (in time and space) of a range of alteration mineral assemblages from the different fluids involved. This superposition has a significant impact on the mineralogy, geochemistry, and physical properties of the rocks, and depending on depth of exposure, a may be a wide range of mineral assemblages and trace mineral compositions in the different alteration zones.

Since the 1960s, exploration in western Canada has identified numerous prospects, and many have been put into production. Research by the mining industry, the federal government, and provincial geological surveys, as well as Geoscience BC, also has greatly increased knowledge of the variability of porphyry-type deposits in British Columbia. But, there has been little effort to combine new knowledge from disparate studies and to construct a model that can be more rigorously applied to exploration under cover and to possible future deep mining of porphyry systems. Several fundamental questions need to be addressed to improve that model. How do we map the subtle distal alteration zonation in areas of little outcrop? What is the nature of the vertically extensive alteration zonation in porphyry systems? What is the effect of the different types of alteration (magmatic, meteoric) on the physical rock properties and the geophysical signature of different alteration zones? What are the likely resistate minerals crystallized within the magmatic-hydrothermal plume that could be detected in transported/weathered materials at surface? To answer these questions, the Footprint Project aims to fully characterize a significant porphyry system, including variations in the mineralogy and geochemistry of the alteration from proximal to peripheral settings, the geophysical signatures of the rocks, and how the mineralogical and chemical changes are manifest in the surficial environment after glacial dispersion and soil development. Establishing a large number of high quality data layers for a single system, including new geological, geochemical, geophysical, petrophysical and other data, will provide a foundation for a fully integrated model of the footprint.

The research network will focus on i) identifying the presence of an alteration halo outside the economic mineralized zones, ii) defining the extent of the distal alteration and geochemical, mineralogical and petrophysical zoning that can vector towards the ore zones, iii) relating the bedrock features to anomalous features in the overlying surficial environment; iv) investigating the relationship between alteration and the geophysical signatures. The consistent collection of rock property data at each sample site will be essential for generating first-order constraints on the interpretation of the geophysics.