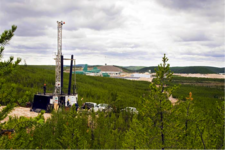 Sedimentary basins currently supply about 70% of the world's uranium, and their substantial sizes make these basins the most promising targets for future exploration. Canada's most important uranium deposits have been discovered in Proterozoic sedimentary basins, although the Athabasca Basin is the most significant. These deposits are commonly spatially associated with the unconformity at the base of these basins, with recent discoveries at depths up to a kilometer and all current targets being under cover. Exploration for uranium deposits has relied heavily on the radioactivity and redox-reactive nature of uranium that result in both physical and geochemical anomalies relative to background. However, the deposits themselves are volumetrically small (individual zones within mineralized trends typically being tens to a few hundred metres long and a few tens of metres wide and thick). As a result, the emphasis has been on the ability to remotely map prospective structural settings and to detect the larger subsurface alteration developed during fluid flow within the host sedimentary basin. There has been widespread recognition that aquifer- or structurally-controlled fluid flow played a key role in the formation of large-scale diagenetic and hydrothermal alteration throughout the basins. The challenge has been to distinguish the alteration associated with uranium-bearing versus barren fluids, to distinguish between pre-, syn- and post-mineralization hydrothermal effects, and to find the appropriate mineralogical and geochemical (including isotopic) signals that directly vector towards uranium mineralization within the alteration zones.

Although exploration has historically focused on unconformities, and especially graphitic bodies that potentially controlled uranium deposition, recently discovered deep deposits, such as Centennial and Millennium in the Athabasca Basin, have shown that some uranium mineralization can occur above and below the unconformity and at some distance from graphitic bodies. In the Athabasca Basin, Cameco has made use of extensive research on the history of the basin to help identify mineralized corridors controlled by basement faulting and terrane boundaries that were important conduits for the movement of fluids. Exploration of these corridors is complicated by later faults that may be post Athabasca or, in some cases, growth faults related to the basin formation. The different fault systems have complex histories and varying morphologies that controlled uranium-bearing fluid flow both during and after the mineralizing process. Illite-rich alteration zones are recognized at the scale of the hydrothermal corridors and appear to define the outer extent of the mineralizing systems. This is critical, as non-conductive deposit types are now being recognized that formed away from the major structures.

Entirely new exploration approaches need to be developed that account for the different types of deposits now being recognized in the Athabasca Basin. This includes identification of the metal sources, processes responsible for the development of fluid migration pathways and the full range of physical/chemical traps for ore and its secondary remobilization. Questions that need to be addressed include: Which lithostructural settings efficiently focus fluid flow and precipitate uranium and how can these be geophysically mapped under cover? What is the sequence of hydrothermal events and ore formation along and away from ore-controlling structures? How do different basement rocks, basement relief and structures affect the distribution and expression of alteration and variation of elements in the overlying sandstones? What are the petrophysical characteristics of subtly and intensely altered sedimentary and basement rocks, and what geophysical techniques can be used to map them under cover? What controls the transport of uranium and associated elements to (and subsequently away from) the different uranium deposit types, particularly at low temperatures where these components may be mobilized out of the deposit? How does the spatial distribution of surficial geochemical anomalies relate to mineralization and faults in the basement rocks and overlying sandstones? In summary, how can the integration of geological, geophysical, petrological, mineralogical and geochemical data help detect blind deposits along these structures and, ultimately, what is the most efficient way of detecting and imaging mineralization at depth?

The research network will focus on i) identifying the shallow exploration footprint caused by both syn- and post-mineralization fluid flow centered on the Millennium-McArthur River corridor, ii) fingerprinting and differentiating various sandstone- and basement-hosted alteration facies, iii) defining the outer extent of alteration and any geochemical, mineralogical and petrophysical zoning that can define vectors towards ore, iv) characterizing the rock property and multiparameter geophysical footprint of mineralized versus barren parts of the Millennium-McArthur River trend, v) cataloguing and interpreting kinematic indicators to determine fault history in relation to alteration and mineralizing events, and vi) testing the effectiveness of layered and scaled geophysics and geochemistry in focusing exploration on areas of high potential along the trend. The research emphasis will be on comparing barren versus mineralized parts of the fault system by better integration of geology, geochemistry, geophysics and rock properties. A major goal will be to differentiate productive EM conductors from background stratigraphic conductors. Although most of the work will be carried out on defined sections, ideally it will extend outside the footprint study area and link to research initiatives of the Athabasca Working Group of the Saskatchewan Geological Survey and Geological Survey of Canada as they develop a useable 3D model for the basin. In addition, the research team will be supplemented by an on-going TGI-4 study of the geochemistry of surficial materials in the Millennium area and of alteration along the P2 structure.